THE MENU AT THE FIRST THANKSGIVING

I just got off the phone with a reporter from a Boston newspaper who wanted to take advantage of my years of research on the First Thanksgiving. She had left a message on my phone earlier, so I had a moment to speculate about the questions she might ask. My mind raced over the possibilities.

“Perhaps she wants to discuss the Pilgrims’ motivations for coming to New England,” I thought to myself. That’s a rich and complex question that is key to the Pilgrims’ world view.

“Or possibly she is fascinated with how the Pilgrim Story came to be viewed as an important chapter in the founding of the United States,” I mused. “Maybe we’ll get to talk about the role that the First Thanksgiving has played in cultural memory, and the way that our memories of Thanksgiving say a lot about what we value, or think we value, as a people.” My excitement grew.

“Or perhaps she understands the priceless value of history as a conversation with the past in search of insight, perspective, and wisdom,” I silently rhapsodized. “Maybe she’ll ask how we might learn from the Pilgrims and not just about them. Shoot, she might even ask whether there’s anything in the history of Thanksgiving that we need to hear, something that would challenge, or convict, or even inspire us!” I was giddy with anticipation.

And then I returned her call. “I’m doing a piece on the First Thanksgiving,” the reporter stated matter-of-factly, “and I want to talk with you about what was on the menu.”

Actually, I wasn’t that surprised.  Since The First Thanksgiving came out a little over a year ago, I’ve done about forty radio interviews concerning the book, and the question of what the Pilgrims and Wampanoag had to eat has featured prominently in almost every one of them.

I still remember a live call-in show hosted by a smaller station in the midwest.  I spoke briefly at the outset, explaining some of the ways that a truer understanding of the First Thanksgiving can illuminate what it means to think Christianly about the past.  To say that the switchboard didn’t light up once the phones were opened would be an understatement.  After a few painful minutes (that seemed like hours), the host finally announced that there was a caller on line one.  The sweet older lady thanked me profusely for my book–on my end of the line I was blushing–and  then she posed the question that she keenly hoped I could answer.  “Is it true,” she asked, “that the First Thanksgiving meal included succotash?”

I plan to continue my series on “The First Thanksgiving in American Memory” in a day or two, but today I’ll interrupt that thread to focus on the Thanksgiving menu.

First, you can find an informative essay on the topic over at the website for the Smithsonian magazine.

Second, here’s a short You-Tube video of an interview with yours truly on the topic.

Finally, here’s what I had to share about the meal in The First Thanksgiving: What the Real Story Tells Us about Loving God and Learning from History:

. . . We can get too caught up in discussing what they [the Pilgrims and Wampanoag] had to eat, but it is worth noting that almost nothing we associate with a “traditional” Thanksgiving meal would have been on the menu. That generalization starts with the main course. From Edward Winslow’s account of the feast it is clear that they had some kind of “fowl,” but nowhere does he refer to turkey specifically. Certainly there were turkeys around. Bradford remembered that there was a “great store of wild turkeys” as winter approached, and later visitors to Plymouth often made similar observations. But there were also eagles, pigeons, and partridges, as well as “swarms and multitudes” of waterfowl: geese, ducks, swans, herons, and cranes.

And the waterfowl were incomparably easier to catch. When he visited Plymouth a few years later, an agent of the Dutch West India Company described the wild turkeys that he hunted there as having “very long legs” that enabled them to run “extraordinarily fast.” Even “when one has deprived them of the power of flying,” he marveled, “they yet run so fast that we cannot catch them unless their legs are hit also.” In contrast, in his opinion the “great many geese” were “easy to shoot, inasmuch as they congregate together in such large flocks.”

His Pilgrim hosts surely agreed, for their matchlock muskets were so long and heavy that they typically used tripod-like “stands” to support the barrel while they waited for something edible to cross their field of fire. Given the flocks of ducks and geese that descended each autumn on the area’s numerous lakes and ponds, the four men that Governor Bradford sent “on fowling” likely concealed themselves at the water’s edge and then blasted away. It was less sporting than chasing roadrunner-like turkeys through the woods, but undoubtedly more efficient.

To complement the game birds that the hunters brought back, the Pilgrims may have added fresh fish, mussels and clams, and perhaps eels, which could be caught in September “with small labor.” The “trimmings,” which were less plentiful, would have included Indian corn (ground and used to make porridge or “succotash”) as well as what the Pilgrims called “sallet herbs”: vegetables from their gardens such as collard greens, parsnips, turnips, carrots, onions, spinach, and cabbage. (If you’re striving for authenticity, try serving turnips and eel next Thanksgiving.) There would have been no sweet potatoes, which were not native to North America and largely unavailable in England except among the very wealthy. Cranberry sauce would have been missing as well, since the sugar so vital to the dish was unavailable. Nor, sad to say, was there any pumpkin pie. The Pilgrims lacked the butter and flour for the pie crust and faced the added problem of having no ovens for baking. Everything they ate would have been boiled or roasted.

As we imagine them enjoying this banquet—heavy on poultry and fish, light on vegetables and sweets—remember also that the buildings the Pilgrims had erected were tiny, that tables and even chairs were scarce, that knives were rare and that forks were nonexistent. (The latter were available in England by this time but little used among common folk, who dismissed them as a “foppish pretension.”) In our mind’s eye, then, we should picture an outdoor feast in which almost everyone was sitting on the ground and eating with their hands—more like a picnic or cookout than the formal domestic scene we have come to associate with the holiday.

I didn’t share these facts about the menu simply to explode popular myths, much less to help the occasional reader who genuinely wants to recreate an historically authentic Thanksgiving meal.  (I’m all for historical accuracy, but who really wants to exchange turkey and stuffing for turnips and eel?)  I do want to help us see how naturally we embellish the past, how easily we project on the past values and practices that don’t belong there.  “The past is a foreigh country,” British novelist L.P. Hartley once wrote; “they do things differently there.”  When we forget that basic truth, we rob history of much of its power to challenge and change us. 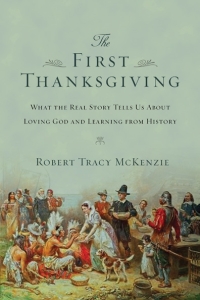 6 responses to “THE MENU AT THE FIRST THANKSGIVING”