WHEN FICTION BECOMES FACT: THE NOVEL THAT TAUGHT AMERICANS ABOUT THE FIRST THANKSGIVING

In my last post I noted that Americans have long been tempted to make up stuff about the First Thanksgiving.  This is true, in part, because so little evidence about the event has survived.  The only surviving firsthand account of the Pilgrims’ 1621 celebration comes from the pen of Pilgrim Edward Winslow, who wrote the following brief description in a letter to England not long afterward:

Our harvest being gotten in, our Governor sent four men on fowling; that so we might, after a more special manner, rejoice together, after we had gathered the fruit of our labours.  They four, in one day, killed as much fowl as, with a little help besides, served the Company almost a week.  At which time, amongst other recreations, we exercised our Arms; many of the Indians coming amongst us.  And amongst the rest, their greatest King, Massasoyt, with some ninety men; whom, for three days, we entertained and feasted.  And they went out, and killed five deer: which they brought to the Plantation; and bestowed on our Governor, and upon the Captain, and others.

These 115 words don’t give us a whole lot to go on, do they?  And yet Americans have constructed quite an elaborate edifice on this flimsy foundation.

In actuality, much of what might be called the “traditional” memory of the Pilgrim’s 1621 celebration dates from the late-nineteenth century.  This was a time when “television was called books,” to quote the grandfather in The Princess Bride, and no book was more successful in making the First Thanksgiving “come alive” than a best-selling historical novel by Jane Austin. 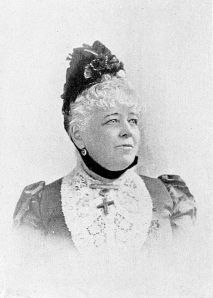 No, not Jane Austen, the early-nineteenth century British writer famous for novels like Pride and Prejudice and Sense and Sensibility.  I’m referring to Jane Austin (notice the different spelling of the last name), the late-nineteenth century American author of such literary classics as A Nameless Nobleman, Mrs. Beauchamp Brown, and Nantucket Scraps.  In 1889 this fifty-eight-year-old New England wife and mother penned Standish of Standish: A Story of the Pilgrims, and in the process created a stereotypical view of the First Thanksgiving that has lasted for generations.

Austin promised her readers that they would “not be misled as to facts, though these be strung upon a slender thread of romance.”  In reality, romance dominates the plot, and as for the facts, well, let’s just say that they were few and far between.  Historical novels always involve some combination of fact and faction, but Austin embellished the historical record with a vengeance.  This was particularly true of her chapter on “The First Thanksgiving of New England,” where she had few known facts to constrain her and could let her imagination run wild.  My own (conservative) guess would be that 99 percent of the material in this chapter is pure invention.

To begin with, there is a pervasive romantic tension that reads like the script of a network soap opera.  In this one single chapter (out of forty) we learn that John Howland is interested in Elizabeth Tilley (and that both enjoy popcorn); that the widower Bradford has apparently been making eyes at Mary Chilton; that the widower Allerton has proposed unsuccessfully to Priscilla Mullins; that Priscilla only has eyes for John Alden, though he has yet to succumb to her “saucy” and “bewitching” glances; that Myles Standish is infatuated with Priscilla; and that Standish is secretly admired by Desire Minter, who has enlisted the aid of an Indian woman in brewing a love potion that will win his affections.  “Slender thread” indeed.

Significantly, Austin also creatively embellished Winslow’s skeletal description of the Pilgrims’ celebration.  She tells us which four men the governor sent hunting, who was dispatched to invite Massasoit, which three men welcomed the Indians when they arrived at sunrise on a Thursday morning, what Edward Winslow was doing at that precise moment (he was buttoning his doublet), and what Massasoit’s brother thought to himself as he marveled at the Pilgrims’ marksmanship.

As Austen tells the story, however, the Indians soon recede into the background, and this Victorian housewife reserves her most lavish detail for the imagined culinary accomplishments and domestic sensibilities of the Pilgrim womenfolk.  We read that “by noon the long tables were spread” in the most idyllic of settings, as “the thick yellow sunshine filtered through with just warmth enough for comfort, and the sighing southerly breeze brought wafts of perfume from the forest.”  The menu for the banquet would have done honor to a Boston hotel.  There were numerous enormous turkeys, of course (“more succulent” than “any I ever saw at home,” according to John Alden), perfectly complemented by Priscilla Alden’s beechnut stuffing.  But there was much, much more:

The oysters in the scallop shells were a singular success [the ladies had fried the oysters in a mixture of bread crumbs, spices, and wine, and placed a serving of the delicacy in a clamshell at each man’s place], and so were the mighty venison pasties, and the savory stew compounded of all that flies the air, and all that flies the hunter in Plymouth woods, no longer flying now but swimming in a glorious broth cunningly seasoned by Priscilla’s anxious hand, and thick bestead with dumplings of barley flour, light, toothsome, and satisfying.  Besides there were roasts of various kinds, and thin cakes of bread or manchets [loaves or rolls made from the finest wheat flour], and bowls of salad set off with wreaths of autumn leaves laid around them, and great baskets of grapes, white and purple, and of the native plum, so delicious when fully ripe in its three colors of black, white, and red.

You’ve got to give Austin credit for a lively imagination, and in truth, the problem with Standish of Standish doesn’t lie in its grandiose embellishment of the historical record, per se.  There’s nothing intrinsically wrong with historical fiction as long as we know that’s what we’re getting.  Austin was far from candid about the extent of her embellishment, however, and we can only wonder how long her nose grew when she promised her readers that they would “not be misled as to facts.”  What is certain is that the public adored how she made the past come alive.

Austin’s novel went through twenty-eight printings and has shaped popular memories of the First Thanksgiving ever since.  In 1897 the national magazine Ladies’ Home Journal drew heavily from Austin’s novel for an article titled “The First Thanksgiving Dinner.”  Only eight years after the publication of Standish of Standish, Austin’s fictional recreation was so widely accepted that the magazine repeated her details as unquestioned historical fact.

The Journal did add one important contribution to the story, however.  While Standish of Standish had included no illustrations, the magazine’s article was headed by a sketch from an artist named W. L. Taylor.  The drawing, widely reproduced and imitated, featured the now familiar portrayal of the Pilgrims and the Wampanoag seated at a heavily-laden banquet table, the Indians obviously uncomfortable in such a formal setting, the Pilgrims—decked out in black suits, white lace collars, and high steepled hats—much more at ease.

The stereotype was now complete.

One response to “WHEN FICTION BECOMES FACT: THE NOVEL THAT TAUGHT AMERICANS ABOUT THE FIRST THANKSGIVING”