I haven’t met a teacher yet who was drawn to the profession because of a passion for grading papers.  Grading is the least rewarding part of my job, and I suspect that my students aren’t too crazy about my grading either.  This past week the first big batch of essays came due in two of my classes, and I’ll admit to feeling a vague sense of dread.  But then we were blessed with the most glorious weather in Chicagoland, and my schedule was such that for two consecutive afternoons I was able to slip away and grade papers in the most idyllic setting.

If you’ve followed this blog for a while, you know that I have a favorite spot at Lake Ellyn Park in Glen Ellyn where I do most of my summertime reading, but the city is renovating the warming house by the lake and “my” bench is now in a “hard-hat area” closed to the public.  So I headed west instead of east from campus and in fifteen minutes I was at Cantigny, a five-hundred-acre public park located on the former estate of the late Robert R. McCormick, long-time editor and publisher of the Chicago Tribune.  The park has thirty acres of formal gardens, and in ambling around them I came across the gazebo below and immediately ensconced myself. 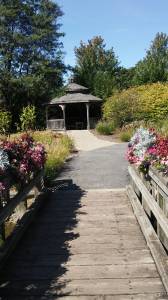 The gazebo contains three cushioned chairs and a small table, and I may start holding office hours there.  Looking southeast from the gazebo affords a view of a small lake and fountain and the McCormick mansion beyond.

Looking southwest from the gazebo, the prospect feels less formal and more isolated: 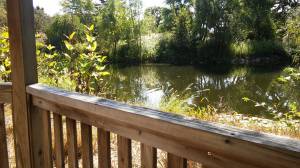 I tried grading papers facing in each direction.  Both views were glorious.  The essays didn’t change, but my state of mind did.  Thank you, Father!

On the way to my new office.

EXPOSING THE MYTH OF CHRISTIAN AMERICA . . . SORT OF

I’m sorry to have been away for so long. The beginning of a new academic year is always hectic, and this year seems more frenzied than most. I’ll try to check in at least once a week, although I’ve fallen short of that goal recently. I thank you in advance for sticking with me.

Last time I promised to report on a couple of books that I read this summer on faith and the American founding. In this post and the next I’ll make good on that pledge. The question of whether the United States was founded as a Christian country is a historical perennial—it keeps coming back. Or maybe it’s more accurate to say that it never goes away. When I interact with Christians who are interested in history, nine times out of ten this is the first topic they want to talk about.

I was reminded of this last weekend when I began a month-long series of lectures at an evangelical church on what it means to think Christianly about our nation’s past. My goal in the opening talk was simply to persuade the audience that Christians need to pay attention to history—indeed, that we have an obligation to do so—and I said almost nothing about American history specifically. (You can see the gist of my argument here.)  Even so, one of the first questions after I was done concerned the beliefs of America’s founders. Wasn’t the United States founded by Christian men guided by Biblical principles?

It’s a good question but not an easy one. History is complicated, and we live in a culture that requires answers in 140 characters or less. Compounding the challenge, the question has become hopelessly politicized. It’s intertwined with a host of controversial contemporary issues having to do with religious freedom in our increasingly secular society. This raises the stakes. And precisely because more is at stake, the question becomes both more important and harder to handle. Without realizing it, we’re tempted to make history into a weapon instead of a source of wisdom. Unfortunately, we rarely learn from the past when our goal is to prove points with it.

This is why I’m always on the outlook for good books that can help American evangelicals think Christianly about our nation’s past, and why I immediately put Steven Green’s latest book on my reading list when it came out earlier this year. The title was enough to hook me: Inventing a Christian America: The Myth of the Religious Founding. I also respect the press that published it. Oxford University Press (which published my book Lincolnites and Rebels) is not a Christian publishing house, but its editorial board takes religion seriously and the press has published a lot of fine work in the area of religious history.

I’ll be reviewing the book for academic scholars in Fides et Historia, a journal affiliated with a national organization of Christian historians called the Conference on Faith and History. Here are my thoughts concerning what Inventing a Christian America has to offer interested Christian readers outside the Academy. 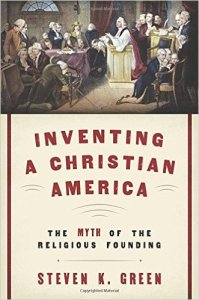 The author, whom I do not know personally, is a professor of law and director of the Center for Religion, Law, and Democracy at Willamette University. Green explains in the opening pages that his goal is to “unravel the myth of America’s religious foundings,” to help us understand “how the idea of America’s Christian origins became a central part of the nation’s founding narrative.” He promises not to become embroiled in the “irresolvable” debates over whether the Founders “were devout Christians or atheistical deists, of whether the people of the founding generation believed chiefly in divine providence and the role of religion in public life, or in separation of church and state.” Rather than focus primarily on the founding and the Founders, in other words, Green wants to explain why the belief that America was founded as a Christian nation became so important to later Americans’ sense of national identity. Where did the myth come from, and why did it become so deeply entrenched?

Green’s answer is that the myth evolved over several generations, but that “the most significant period of myth-making occurred in the early years of the nineteenth century as the second generation of Americans sought to redefine and reconcile the founding to match their religious and patriotic aspirations for the nation.” This was a period when the Second Great Awakening was transforming the American religious landscape and evangelical denominations—Methodist and Baptists, most notably—were exploding in size and cultural influence. As Christianity flourished in America during the early 1800s, American Christians retroactively baptized the 1600s and 1700s as well, inventing—or at least exaggerating—the nation’s religious roots. In sum, they practiced “revisionist” history.

Let me put my cards on the table here. I think that Green is partially correct. The evidence is overwhelming that the proportion of Americans belonging to Christian churches mushroomed dramatically during the first half of the nineteenth century. It’s also clear that there was a lot of creative rewriting of the nation’s founding during these years. The revolutionary generation had passed from the scene by the height of the Awakening, and newly zealous evangelicals were quick to swallow sentimental commemorations that recreated the past in their own image. They were neither the first nor the last members of the human race to engage in this near universal practice.

Beyond this, Green offers some specific insights that American evangelicals interested in our history need to hear. Repeatedly, he makes the good point that we should be just as cautious in reading histories of the founding written in the nineteenth century as we are of histories written in the twenty-first century. When David Barton insists, for example, that accounts written before 1900 are intrinsically more trustworthy than more recent works, he’s just revealing his ignorance of the context in which the former were written.

Green is also correct to remind us of the danger of proof-texting sources from the past. Most Christians are alert to the danger of plucking isolated verses from the Bible without paying sufficient attention to the totality of Scripture, but we frequently abandon that caution when it comes to the writings of the Founders. We’re rarely willing to do the hard work of immersing ourselves in the historical era that interests us when a few scattered quotes are sufficient to confirm our preconceived notions.

Despite these strengths, I really can’t recommend this book. Here are three reasons why. First, Green fails to follow the roadmap for the book that he sets out in the introduction. Rather than shunning the “irresolvable” debates over the actual religious beliefs of the Founders, Green devotes four fifths of the book to “debunking” specific claims about the founding. The result is that he spends a great deal of time going over territory that has already been plowed again and again: the influence of Christian belief on the establishment of the American colonies, the connection between Christian convictions and the American Revolution, the specific religious beliefs of the leading Founders, and the role of religious principles in the nation’s founding documents, among other topics. In contrast, very little of the book actually focuses on the historical memory of Americans during the early nineteenth century, the period when the belief in America’s Christian founding was supposedly taking root.

Second, because of the approach that Green takes, his treatment of the founding is almost unavoidably superficial. He tries to cover way too much in a book of just over two hundred pages: the establishment of the colonies; the religious beliefs of individual Founders; the influence of Christian conviction and Scriptural principle on views of religious freedom, on political liberty, on resistance to authority, on the Declaration and Constitution, among other things. When he finally gets to the early 1800s—the period that was supposed to be the focus of his book—he seems to have lost steam. He devotes barely forty pages to suggesting how the belief in America’s religious founding grew after the passing of the Revolutionary generation, and his account is superficial and anecdotal, shifting from Parson Weems to Lyman Beecher to Alexis de Tocqueville in rapid succession.

Finally, my sense is that Green has stacked the deck against the Christian America argument. Repeatedly, he defines the argument for America’s religious founding in a way that is easy to discredit. For example, with regard to the original establishment of Britain’s American colonies, he insists that the Christian Nation myth posits not only that the colonies were settled by religiously motivated Christians who believed that government was ordained by God and derived its authority from the Creator, but also that the original settlers were religious dissidents wholly committed to modern understandings of religious freedom. The latter is child’s play to topple. Seventeenth-century Protestants almost never understood religious liberty as we would today. As Green frames his argument, however, their religiously motivated opposition to modern standards of religious toleration becomes evidence for the myth of Christian America. I call that strange.

In the end, this is a book that could have been much better, much more valuable to Christian readers than it is.

Posted in Faith and the American Founding

The new academic year started last week here at Wheaton College.  It’s an exciting time, but always hectic.  Compounding the predictable craziness that comes with the first week of classes, I made a whirlwind trip to Gordon College in Wenham, Massachusetts to assist with an external review of their History Department.

Rest assured, I haven’t forgotten you, though it may take a while to catch my breath and get back into the routine of regular posts.  This fall I’ll be sharing reviews of summer reading on faith and the founding, and also asking you to help me think through how best to resurrect a particular Civil War soldier that I am getting to know through his correspondence.

In the meantime, I thought you might enjoy the admonition below, sent to me by a former student.  I loved it.

Back in touch soon. 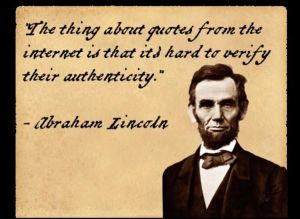